Youths are our most valuable assets, says Osinbajo 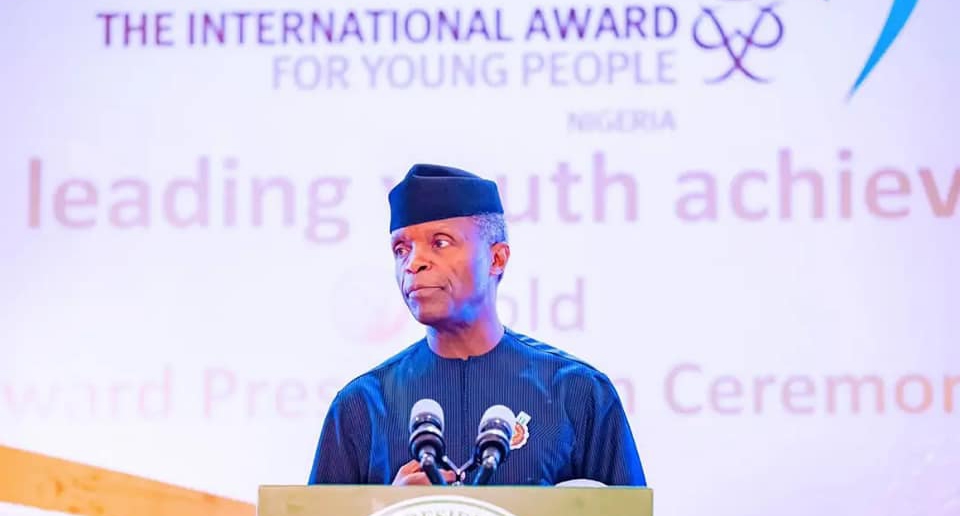 Nigeria’s vice president, Yemi Osinbajo has stated that the federal government will continue to support young Nigerians to reach their full potential.

This was stated by Osinbajo at the 2021 national gold award presentation ceremony, organised by the International Award for Young People (IAYP) at the State House, Abuja.

The award programme, which held on Thursday, is the Nigerian version of the Duke of Edinburgh’s International Award for Young People.

Hailing the various ways in which young people contribute to the nation’s wellbeing, the vice-president cited the example of “young Nigerians in our armed forces leaving behind family and friends to serve our country in various internal security operations across the country”.

“We have seen how young Nigerians rallied in the wake of the COVID-19 pandemic and designed various technology solutions to support the government,” Osinbajo said, according to a statement issued by Laolu Akande, his spokesperson, on Friday.

“We have seen Nigerian youths break new ground and earn global acclaim in innovation, technology, sports, the arts, and entertainment.

“Clearly, our young people are our most valuable assets, and the federal government believes that they must be encouraged and supported in every way.”

Speaking about interventions aimed at supporting Nigerian youths in different sectors, Osinbajo also spoke on the plans of the government to raise $500 million to support the technology and creativity ecosystem.

He recalled that Buhari had, in 2021, launched the Nigeria Jubilee Fellows Programme, supported by the United Nations Development Programme (UNDP), the European Union, and the private sector.

The programme, he said, will run for five years and will give well-paid work experience opportunities to 20,000 young Nigerians every year in private and public sector organisations.

Acknowledging the resourcefulness of recipients of the award, he praised the exploits of “Musab Muazu who engaged in educating out-of-school ‘almajiri’ children, inspiring them to seek education and helping them to read and write”.

“Another recipient, Odikpo Emmanuel, having lost one of his friends to suicide, was involved in promoting advocacy against suicide and promoting mental health awareness among young people within his community through organising workshops, symposiums, and various advocacy programmes,” he added.

“A recipient, Faithwins Iwuh, for her Gold residential project, volunteered at the Renaissance Hospital in Enugu State having observed that the hospital was experiencing a shortage of staff. She had to reside in the hospital for a month volunteering as a health worker and support staff to the hospital.”

The post Youths are our most valuable assets, says Osinbajo appeared first on NEWS.