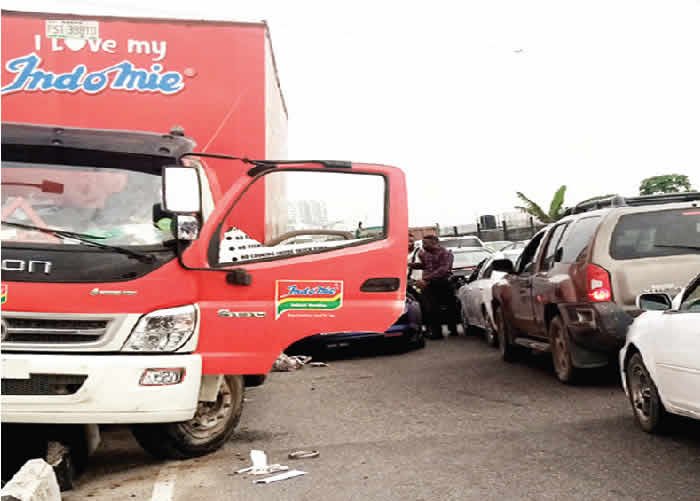 A truck driver conveying noodles crushed a female traffic warden to death after skidding off the road due to brake failure in the Lekki area of Lagos State.

The driver was said to have rammed into some vehicles at the Shoprite end of the Lekki-Epe Expressway, where he knocked down the policewoman.

The corpse was reportedly removed by her colleagues, and the truck towed to the Maroko Police Division.

According to PUNCH, an eyewitness, who identified himself only as Bayo, said, “An SUV broke down in the middle of the road outward Lekki this morning (Thursday). So, the traffic warden and some LASTMA officials stood on the median and started controlling the traffic caused by the vehicle.

“The policewoman was backing oncoming vehicles from the toll gate while standing on the median when a truck came from behind, climbed the culvert and knocked her down. The truck also damaged close to five vehicles on the other side of the road.”

An official of the Lekki Concession Company, who spoke on condition of anonymity, said the deceased was done with controlling the traffic and was walking to meet her colleagues when she was hit from behind and died on the spot.

“It is true that medical officials did not arrive early, but there was nothing they could have done,” she added.

Another eyewitness, Arike, disclosed that the driver attempted to run away, but was caught and handed over to the police.

The state Police Public Relations Officer, SP Benjamin Hundeyin, who confirmed the incident said, “The officer was an ASP. She was a traffic officer serving around Shoprite close to Lekki Toll Gate, and was knocked down by a mini Foton truck with number plate FST 398 YD. The driver was identified as Tunde Oyeyinka. He has been arrested and detained. The corpse has also been deposited in a mortuary.”

The spokesperson for the Lagos State Emergency Management Agency, Nosa Okunbor, also confirmed the incident, adding that personnel of the Lagos State Ambulance Service were deployed in the scene.