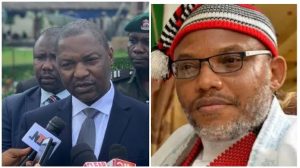 The minister of justice and Attorney-General of the Federation, Abubakar Malami, on behalf of the Federal Government of Nigeria has adjusted some charges filed against the leader of the Indigenous People of Biafra, Nnamdi Kanu.

The minister disclosed that the court would be hearing cases on murder, terrorism, banditry and criminality as the ongoing trial has taken another course.

Recall that Department of State Services, DSS in November 2015 had filed cases of intimidation, criminal conspiracy, unlawful possession of firearms and membership of an illegal organisation, saying it breaches penal code of Section 97, 97B and 397.

Malami in a statement released on Wednesday, accused the IPOB leader of committing heinous crimes including the alleged killing of Fulani cattle rearers, Force personnel, amongst others.

The minister in his statement also described the Fulani herdsmen as innocent and only catering for their cattle.

Malami warned IPOB members to stay away from the next court sitting, but added that Kanu’s lawyers will be permitted around the court premises on the trial day.

Also, no branded IPOB T-shirt or caps will be allowed within the court area.