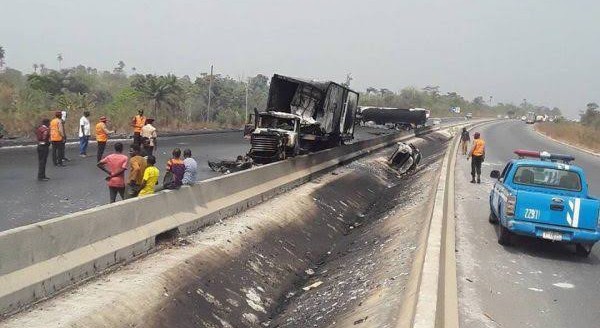 In a statement made available to the News Agency of Nigeria (NAN) in Uyo on Monday, the Sector Commander of the Federal Road Safety Corps (FRSC), Mr. Matthew Olonisaye, confirmed the accident.

The Commander said the crash on Sunday involved a Toyota Hiace bus (KMR 201 XA) belonging to a transport company and Honda Accord car (NGD 228 AE) along Abak – Ikot Abasi Road by Oku – Abak in Akwa Ibom.

He advised vehicle owners to ensure that their vehicles are in order before they put them on the road, to avoid road crashes, especially during the rainy season.

“It was discovered that the Crash involved two vehicles – Toyota Hiace bus (KMR 201 XA) belonging to a transport company and Honda Accord car (NGD 228 AE) all with 18 occupants, out of which 10 got injured while two died in the process.

He said the accident resulted from dangerous overtaking and eventual loss of control.

“According to an eyewitness, the victims were immediately taken to a nearby hospital while the road was cleared of obstructions to enable free-flow of traffic,” Olonisaye said.

Olonisaye said the crash was rather unfortunate as it could have been avoided if only the drivers were conscious and sensitive enough to understand the intricate nature of night driving, especially during this rainy season.

The sector commander expressed displeasure that drivers are still adamant about disobeying traffic rules and regulations capable of endangering the lives and property of other road users despite the sensitisation and enlightenment by the agency.