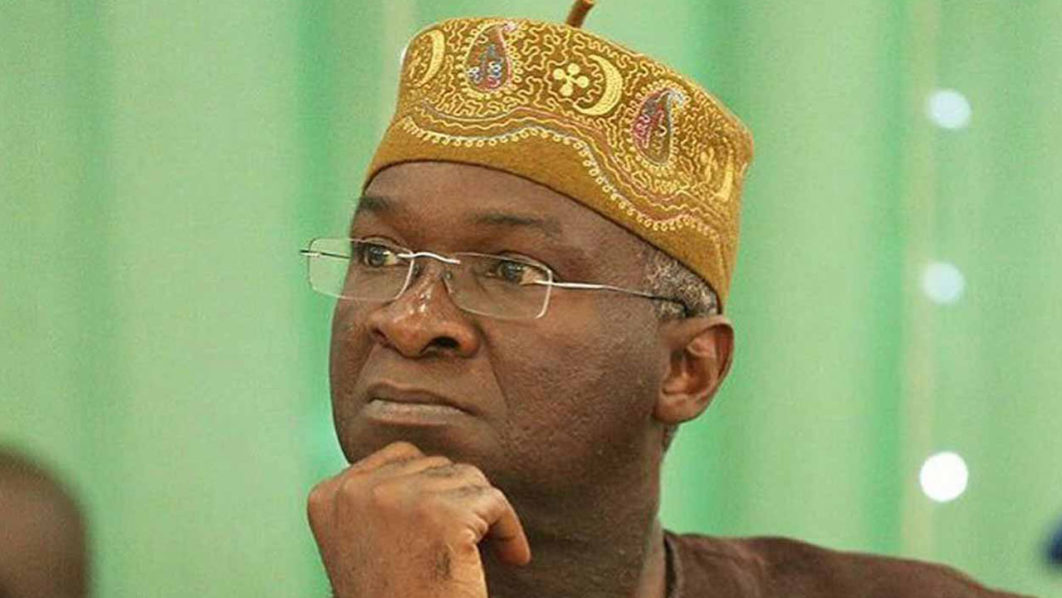 The Minister for Works and Housing, Babatunde Fashola, has said states stand the risk of losing federal road projects over unreasonable demands for compensation by some communities on the road corridor.

Fashola explained that it was the responsibility of the various state governments to settle such issues once land was identified as suitable for a federal road to pass through because the Land Use Act vests powers over land in states.

The minister spoke in an interview with Vanguard in his office, in Abuja.

According to him, some federal road projects were being delayed because funding had been secured and contractors engaged but couldn’t move to site because communities were making all kinds of demands for compensation.

He, however, commended some state governors for taking the initiative by settling such issues thus paving way for projects to go on as planned and on schedule.

Fashola said, “Compensation as I told you is a state responsibility, so there is nothing to lose my mind about. The president has made it clear, this has to be on a collaborative basis, we’ve designed the projects, we have found the funding, and they give us the right of way after all it is one country. You control the land and any state that does not give the right of way, we take the view that the project is not interesting to you, we will move the resources somewhere else.”

While speaking on how the rising global inflation is impacting ongoing projects, the minister noted that while it was true that a reasonable margin of profit is factored into project costs taking into consideration possible inflationary trends, the current inflationary trend which was not peculiar to Nigeria was not envisaged.

He said, “Our contractors have of course raised these issues, we know them, we know that for example our provisions for variation in prices, didn’t contemplate this astronomic increases so it will be unreasonable in some cases to expect the contractor to go on and so in some places we are making adjustments increasing the provision for the variation of prices.

“We are also telling the contractors, if you are planning to make 10 percent profit, you may be in a better position now to make 3 percent and move on to the next project that we can re-cost in today’s reality or we don’t want you laying off staffs which will be the easiest thing that a contractor will do.

“But the hardest thing for a contractor to do is to shut down his machines; he doesn’t want that to happen either. So, they’ve been reasonable largely, we are having reasonable interactions, they have to give something, that is why I talked about people who want a road, who don’t want to contribute lands, contractors are in some places saying okay, ‘I will just try and finish this, I know there is no profit on this, if I can break even, pay my staff, I will make my profit from the next project’ because they are also Nigerians.

“So, in these challenging times, everybody has to sacrifice something, all the answers can’t come from the government alone, especially as it concerns revenue, there are trade offs here. If we have no economic business, everybody suffers, anything that we can get to do while this bad weather is blowing around, let’s continue to do it, so that is it.”

The minister noted that even the harshest critics of the President Muhammadu Buhari-led administration would admit that it had largely delivered on its promise to improve infrastructure especially in the roads and housing sector.

He noted that it was a fact of life that for every problem you solve, you inadvertently create a new one for which you will be required to constantly find a solution to.

Fashola said, “Every problem you solve in public service in my experience creates a new problem; so when there were no roads for example, we finished the road now, you know the new problem over speeding and you have to find the solution.

“When there was no housing, we built the house now, they said it is now expensive, how do we get money for them to buy? That is our next problem. It doesn’t end.

Asked whether the challenges of office as minister after leaving office as Lagos State Governor left him frustrated, he said, “I don’t feel frustration unfortunately. If I felt frustrated at anything, I would probably have walked away.

“But I see the excitement, I see the challenge and I see the task to be better every day. Lagos is past, it is now history, it’s done, so let’s stop looking in the rearview mirror and let’s stay where we are and tomorrow.

But this is what it is, 36 times of Lagos, yes. What was the longest road we built in Lagos? Lagos-Badagry 60kms; so you are now dealing with 127kms Lagos-Ibadan, 375kms of Abuja-Kano, traversing FCT, Niger, Kaduna, Kano state or Kano-Maiduguri traversing 5 states 560kms.

“You can tour one road in Lagos one day, it will probably take you two days if you are lucky, to inspect one road here, it’s a national enterprise. That is what I mean, it is bigger, the challenges are more complex, from states to states, from territory to territory, and the diversity is extensive and also engaging. I find it educative, I have learnt so much more about the country going round, I have gone the country now three times by road, from state to state.”