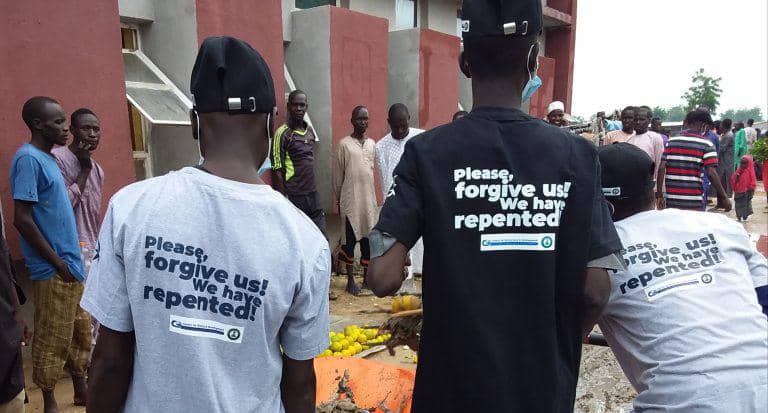 Some repentant insurgents has appealed to residents of communities in Maiduguri, the Borno state capital, to forgive them for their involvement in act of terror.

They made the plea when they embarked on community service and sanitation exercise in communities across Maiduguri.

According to NAN, the exercise was organised by the Centre for Democracy and Development (CDD) in collaboration with the Borno government.

Some of the repentant insurgents wore T-shirts with inscriptions that read ‘Please forgive us’, ‘We have repented’, and ‘Let’s rebuild Borno again’.

Speaking on the exercise, Mala Mustafa, a senior research fellow with CDD, said the exercise is part of efforts to prepare them for their reintegration process.

“The rationale behind this exercise is for CDD to support the Borno state government as part of preparatory work for the reintegration of the ex-combatants,” Mustafa said.

“We felt it is imperative to change the narrative, particularly the negative perception about them among community members.

“We want to rebuild relationship and trust between those that surrendered and community members.”

Advertisement
He said 400 of the repentant insurgents have been mobilised for the exercise, with 50 of them participating this Saturday for a start in Maiduguri hajj camp.

The camp houses over 12,000 repentant insurgents and their families.

Mustafa said the exercise by the repentant insurgents would be gradually extended to selected communities in Maiduguri and neighbouring areas.

According to him, the participants have been provided with training, particularly on civic education, on how to deal with the challenges of stereotyping, while some Islamic clerics taught them on the consequences of extremism.