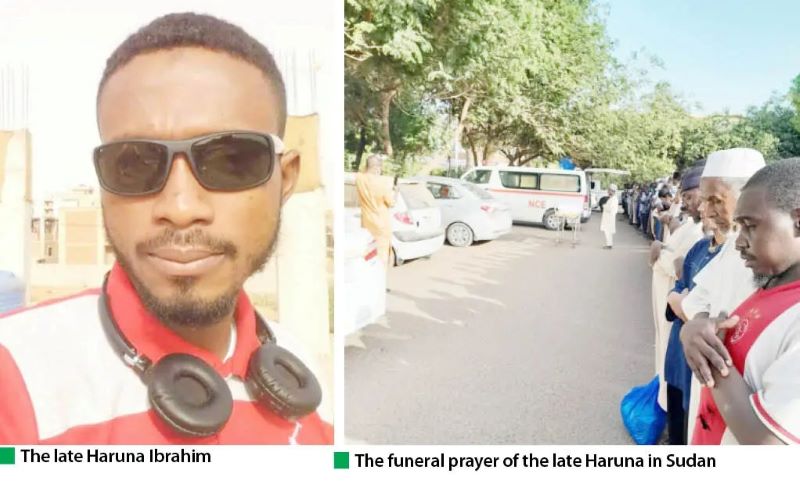 26-year-old Haruna Ibrahim, was stabbed to death by a boy identified as Sarki who is also studying in Sudan while performing abolition in the school premises.

Haruna was said to have been taken to the hospital, but was later confirmed dead on 28th June, 2022.

The mother of the deceased, Zainab Abdulkadir, who is the Zonal Women Leader North West, Atiku Support Organisations, said she is hopeful that her son’s killer will be made to pay for his crime.

Narrating how she received the news of her son’s death with Daily Trust, she said, “On that faithful day around 8:30pm, my son called, and I asked his sister to answer the call. After they exchanged their usual pleasantries, I heard his sister scream, I immediately collected the phone from her and asked “Baba what happened,” he did not go straight to the point, rather, he asked how I was first before telling me he had been stabbed while performing abolition in school.

“I questioned why he was mingling with people that carry knives; knowing he does not fight, he said he met the boy in the afternoon of that day and tried to counsel him on the bad things he does. He said the boy did not like the advice he gave him, so my son told him to continue his bad habits and proceeded to the mosque for his 8pm prayer.

“He said the boy followed him to the mosque and stabbed him in front of people. After telling me how he was stabbed, my son then apologized to me, he asked for my forgiveness and thanked me for the support I have been giving him. He said we will meet in a better place, telling me that he will not be alive the next day and I tried to console him by telling him not to talk like that and he switched off the phone.”

She said after about 25 minutes, she called him back but a doctor picked the phone. After she explained to the doctor who she was, the doctor informed her that her son had been brought to the emergency section; he lost a lot of blood and was billed for surgery.

“The doctor requested that a relative or family member sign the consent form before Haruna is taken in for surgery, I did not have anyone in Sudan so I contacted the agent that processed my son’s travel document to Sudan in Kano and he contacted his brother Auwal, in Sudan.

“Auwal was given the name of my son and the hospital and not long after, he called to tell me that he was at the hospital. He disclosed to me that the consent form stated that my son had a 50/50 chance of survival and I asked him to sign.

“He later relayed to me that after he signed; he went in and saw my son telling him that I sent him and that I was praying for him, my son said, ‘I know my mother will be praying for me but please tell her that I said she should forgive me’.”

She said she wanted to speak with her son but was told he was already in surgery.

“I continued to communicate with the doctor through my son’s phone who told me he was still in the theatre. I kept calling until 4am when she stopped picking my calls. I called back around 7am, when she picked; I asked to speak with my son, she told me he was not out of the theatre and that the operation was not successful.

“I was later informed that my son had died. I suspect that when Auwal told me he had to leave the hospital, Haruna was already dead but he could not confront me with the news. After calling to tell my relations, I immediately called Auwal and asked him to help me take a picture of my late son and the next steps we need to take. He said he will speak with the president of their school since he was a student and told me that the leadership of the school’s union in Kaduna State will call me,” she further narrated.

She said arrangement were made and her son was buried in Sudan according to Islamic rites adding, “I thank the unions of the school because they documented everything in videos and pictures and sent to me. It was like I was there.”

She said, “At the initial stage, the government of Sudan was not willing to release my son’s corpse because it was a police case but I was not deterred, I kept calling until his corpse was finally released after I wrote a letter requesting the release of my son’s corpse for burial before the investigation is complete.

“With the help of Auwal, Marwan from the embassy, the president of the school and other members, my son was given a befitting Muslim burial. They told me that over 200 Muslims attended his burial, they said in Sudan, family members buy the grave where their loved ones are buried, they also pay for the white cloth used to cover the deceased and the bath that is done, but in my son’s case, the youths paid for all and that is why I was not called to send money for his burial.

“After his death, I got to know that there where many people I know in the school and they all spoke well of my son, they said they always met him on the way to the mosque.”

According to her, “Some students in the school who came to condole with me said the boy who killed my son, identified as Sarki, an indigene of Kano State, is a wanted criminal. He got a scholarship to study in Sudan but he was never in school.”

On if she had any clue of him having problems, she said, “My son never told me that he was having problem with anyone, he was a very friendly and patient person, who loved being in the midst of people.

“Since I took my son to the airport in 2018 to board the flight to Sudan, I have not set my eyes on him except for the videos and WhatsApp calls we make; he convinced me to allow him stay there for four years to ease the financial burden of spending money on tickets.

“He is the first person I speak with every day and the last before I sleep. He was studying accounting in the Canadian Sudanese College.”

She said she decided to send him to the school in Sudan so that he can finish his course on time especially with the lingering strikes Nigerian universities are facing. “He promised to come back as a graduate in four years so that he can repay me for the sacrifices I made for him and his siblings.

“No matter what happens, my son cannot come back, I am thankful to Allah that he died as a Muslim, I have forgiven him and I am patiently waiting to meet him in that better place he told me,” she consoled herself.

She called the attention of the Nigerian government on the need to investigate the killing of her son or stop the movement of Nigerian children to school in Sudan so that another student does not face the same fate her son did, adding “Since my son died, the school has never called to condole with me and the killer of my son is still roaming the streets freely.”

The post How undergraduate son of women leader of Atiku Support group was stabbed to death in Sudan appeared first on NEWS.