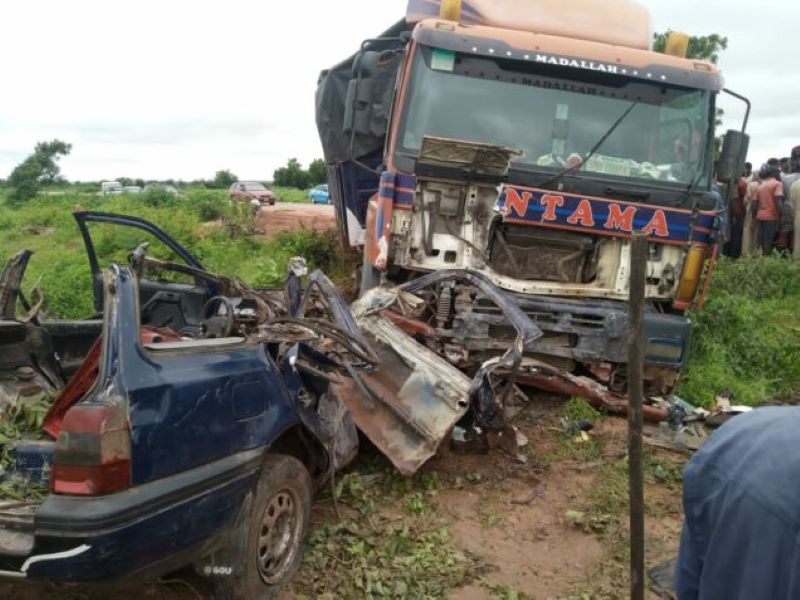 Four persons have lost their lives and five other injured in a road crash on Sokoto-Gusau road.

The Sokoto State Sector Commander of the Federal Road Safety Corps (FRSC), Kabiru Yusuf-Nadabo, who confirmed the accident said the crash occurred at about 7:30 p.m on Sunday, near Dabagi farm.

The sector commander said the driver of the Golf car while on high speed tried to overtake a truck and had a head-on collision with the incoming trailer.

According to him, the car was hooked under the truck and the FRSC officials had to use some instruments to cut the car into parts before evacuating the dead bodies.

Yusuf-Nadabo explained that the four persons died on the spot, while those injured were transported to hospital.

“The crash was unfortunate as it could have been avoided, if only the drivers were conscious and sensitive enough to understand the intricate nature of night driving, especially during this rainy season,” he said.

He expressed displeasure that in spite of the sensitisation and enlightenment programmes by the FRSC, some motorists were still contravening traffic rules and regulations.

The sector commander said motorists should desist from acts capable of endangering their lives and other road users.

He said they must avoid speeding, use of phone while driving and driving against traffic flow.

He also advised drivers to lower their vehicles beams while on night journeys, keep headlamps properly focused, avoid looking directly into the lights of oncoming vehicles and slow down when facing glare from headlights.

Yusuf-Nadabo further advised drivers to reduce speed during rains to enhance their control, keep distance from other vehicles, switch on headlamps for clear visibility, and use wipers, heater and air conditioners as appropriate.