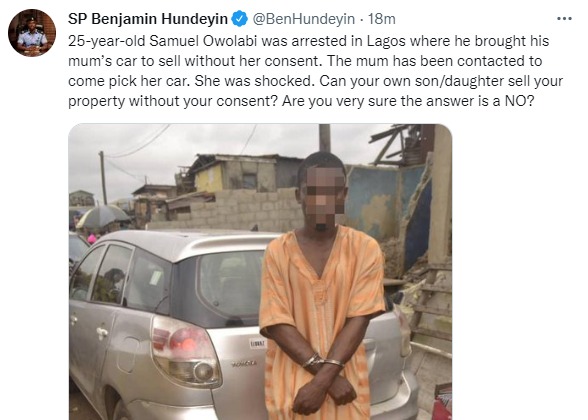 A 25-year-old man identified as Samuel Owolabi has been arrested by the police for attempting to sell off his mother’s car without her consent in Lagos State.

The state police Public Relations Officer, SP Benjamin Hundeyin, who disclosed this on Twitter, said the mother has been contacted to come pick her car.

Hundeyin wrote, “25-year-old Samuel Owolabi was arrested in Lagos where he brought his mum’s car to sell without her consent. The mum has been contacted to come pick her car She was shocked. Can your own son/daughter sell your property without your consent? Are you very sure the answer is a NO?’

The post 25-year-old man arrested for attempting to sell off mum’s car without her consent in Lagos appeared first on NEWS.